Dbus has invested heavily in the use of new technologies as a fundamental tool for maximum efficiency and optimum service and as a commitment to the environment. As a result the company is now availing of leading edge technological systems in different areas: 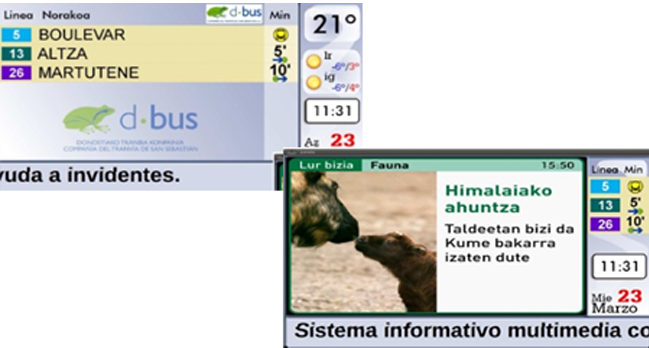 Promotion of the use of the bus as a means of transport offering efficient service, and, at the same time, with a minimum impact on the environment as opposed to that of private vehicles.

With this aim in mind, in the last decade, Dbus has added buses with advanced technology in pollution and fuel consumption reduction to his fleet.

The company’s diesel buses follow a strict maintenance regime, ensuring low emissions and guaranteeing optimised fuel efficiency. In addition, over 83% of the vehicles are above the Euro 3 emission limit, thus guaranteeing cleaner air in the city.

The latest addition to the Dbus diesel fleet were the four 12m MAN Lion’s City buses with Euro 6c technology purchased in December 2017, the most advanced as regards emissions levels.

Since July 2014 and July 2016, three 100% electric buses manufactured by Irizar have been running on Dbus routes. The electric bus is a silent bus with 0 emissions into the atmosphere, which goes to show the company’s commitment to sustainability and the quality of life of the people of the city.

Likewise, from June 2018 to January 2019 Dbus tested in a pilot project its first 100% articulated electric bus, manufactured by Irizar Group. The bus needed night charge in the depot, but also required a 5-6 minutes charge during the route. This charge took place in Miramon bus stop, which is 28-Amara-Ospitaleak line final stop. The bus has a pantograph that unfolds from the roof of the bus and connects to the loading post to receive a 500kW power charge. 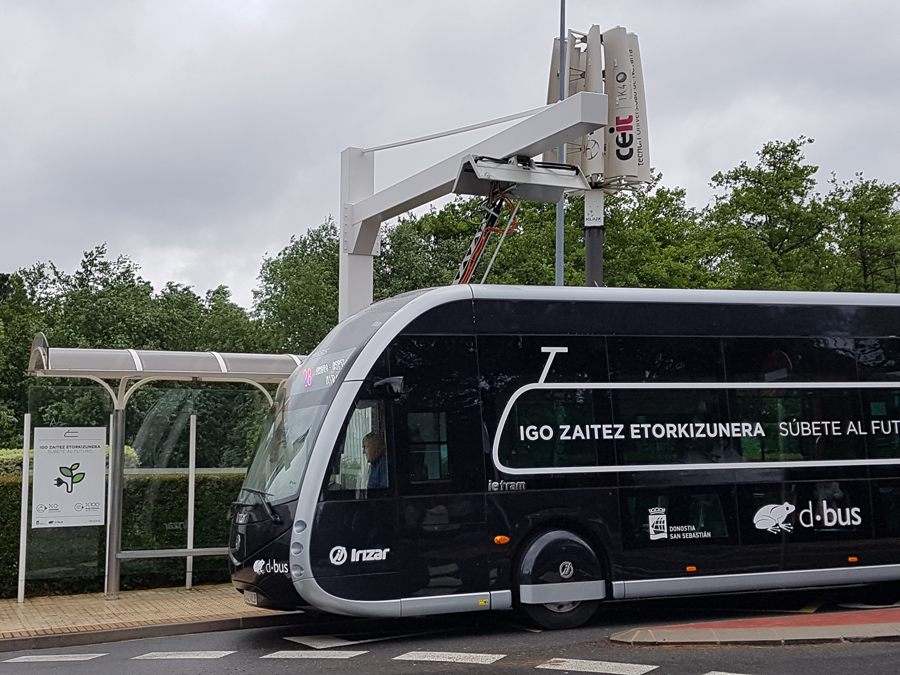 The actual efficiency of each bus can be improved and strengthened thanks to complementary technologies that allow for the optimised performance of the vehicle and, consequently, help reduce their impact on the environment.

Dbus has installed an innovative system for improving the energy efficiency of its fleet and the punctuality of its service. The new system deployed in San Sebastian, called EKObus, is the first to be installed in the world.

EKObus is supported by a Tablet located next to the driver, and acts as a guide for more sustainable driving by means of visual signals and in accordance with the time schedules laid down. It is currently installed in Dbus’ main routes as well as in the hybrid bus running on the city’s different routes. It is made up of two complementary systesms for optimising driving and punctuality:

It is a system that helps reduce fuel consumption and pollutant gas emissions into the atmosphere. Thanks to the instructions displaying as icons, the system tells the driver the proper way to drive at each moment, thus leading to better driving, fuel saving and fewer breakdowns. 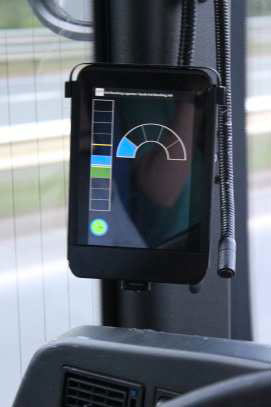 The system for improving punctuality helps maintain the required distance between buses on the same route, so that the frequency laid down for said route is fully observed. By means of a system ressembling a traffic light, the driver is told to slow down or go faster, is indicated the exact time to stop in order to maintain the frequency , as well as the exact time to leave the stop.

Dbus’ most popular routes, route 5 and 28, use the BRT system, which is a top of the range bus system based on rapid, comfortable and efficient transit, with the aid of special traffic lanes giving priority to buses and excellent service to users.

The main characteristics and advantages with respect to other transport systems are:

In addition, BRT systems help improve certain aspects of conventional systems in buses, by raising the vehicle’s capacity, improving commercial speed with the aid of traffic light priority, protecting the reserved lane, improving accessibility at stops, reducing pollutant emissions and improving the image of the vehicles and the service. 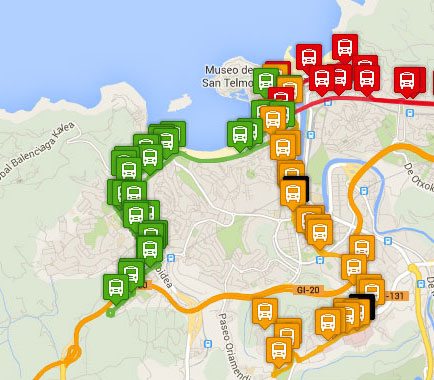 Quality public transport must guarantee its use by everybody, whatever their condition. That is why 100% of the Dbus fleet currently has an access ramp for wheelchair bound people, a central platform for wheelchairs and children’s pushchairs, and seats reserved for people with reduced mobility.

As well as technology for boarding and disembarking the bus, Dbus has audio systems installed for the blind and people with reduced vision to facilitate access to public transport for people with sight deficiency. The audio information system is made up of three systems: on the information panels on the walls, announcing the arrival of the bus, on the outside of the bus indicating the route number and destination of the vehicle, and inside the bus, indicating the next stop.

The audio service is activated by a remote control available to the visually impaired, the one used to activate sound at traffic lights. This system adds to the accessibility and comfort of Dbus services, so that everyone can travel by Dbus unhindered. 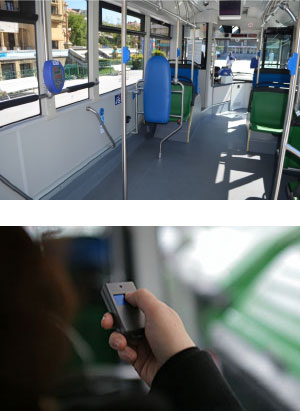 3. Technologies for providing users with information

New technologies provide users with real time information on their route, how to get to a particular part of the city and plan their trip without problems.

Dbus has a variety of tools for consulting and receiving information, adapted to each type of user:

•Website with all the information on numbers, schedules, and routes, and a route planning tool.
•Application for Android and iOS mobile phones, to check the arrival time of the bus, and schedules and to plan a trip at any time or place.
•Platforms in most popular social networks, enabling immediate communication and direct interaction with users.
•QR codes for consultation of arrival times of the bus to the stop
•Free WiFi at stops and on buses
•Visual information system on board the buses, by means of TFT screens offering real time information on the bus route, next stops, information on Dbus routes as well as leisure and entertainment content. 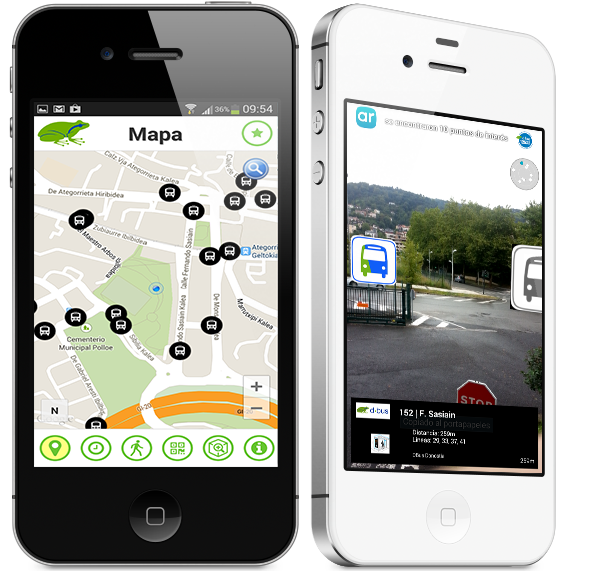 In addition to the information systems keeping users informed of their bus route 24 hours a day, Dbus offers companies and independent developers the opportunity to access their Open Data platform, in order to develop their own applications and functions to improve public transport and help users avail of the same for travelling around the city.

4. Technologies for enabling payment on the bus

Payment technologies are increasingly faster, more unified and simpler. The evolution of payment systems in Dbus allows users to avail of a variety of payment methods to suit their life style: 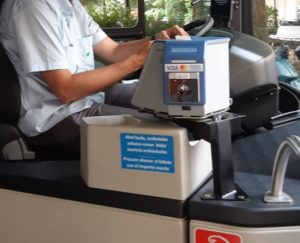 Dbus has launched a system that enables users to pay bus fares using contactless bank cards on all bus routes in San Sebastian. The system is available on both day and night services. Passengers can validate their contactless card at the ticket machine by the driver. The machine is marked with the logos of VISA, Mastercard and American Express. Each bank card or mobile application allows paying as many trips as the user wants and without commissions. 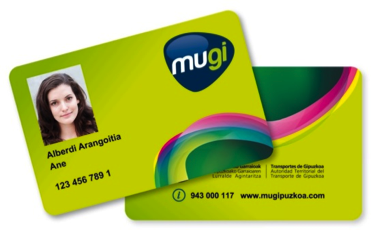 All cards currently used to pay your fare on Dbus are contact free. You just need to bring the card close to the validating machine, without the need to insert it in the machine. This system helps speed up the boarding process, preventing the formation of queues and giving more autonomy to passengers.

In addition, contact free cards carry progressive discounts for use and profile type, so the more often public transport is used, the greater the discounts.

Thanks to the integration of fares and payment methods of the public transport operators in Gipuzkoa, users can now travel using the same card in all of the territory’s public transport means. A user travelling by Dbus in San Sebastian can pay their fare using the same card to travel to another town while accumulating the corresponding discounts. Transfers are also more simple, as changes with the same operator are free of charge, and there is a considerable discount when they are made between different operators. 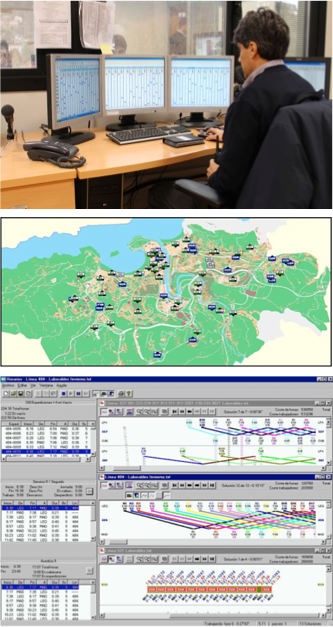 The optimisation of existing resources not only implies maximum performance, but also a more efficient and reliable service. At Dbus we work with the most advanced programs to manage buses, schedules and personnel.

The system allows for the optimisation of resources and guarantees the service and punctuality of the buses, by means of the constant monitoring of the buses running. By means of this system, Dbus experts can provide an immediate response to traffic incidents, incidents relating to the buses themselves, as well as minimise the delays caused by said incidents, and offer people the best service.

Resource and schedule optimisation systems
Dbus has advanced software to make the best possible use of the bus fleet and available personnel, and thus reduce to a minimum the downtime of each bus and each driver during their working day.

Each route’s schedule is planned using the same optimisation concept, as waiting times at stops are lowered and the service offered provides greater cover.

6. Technologies for improving the efficiency of the service 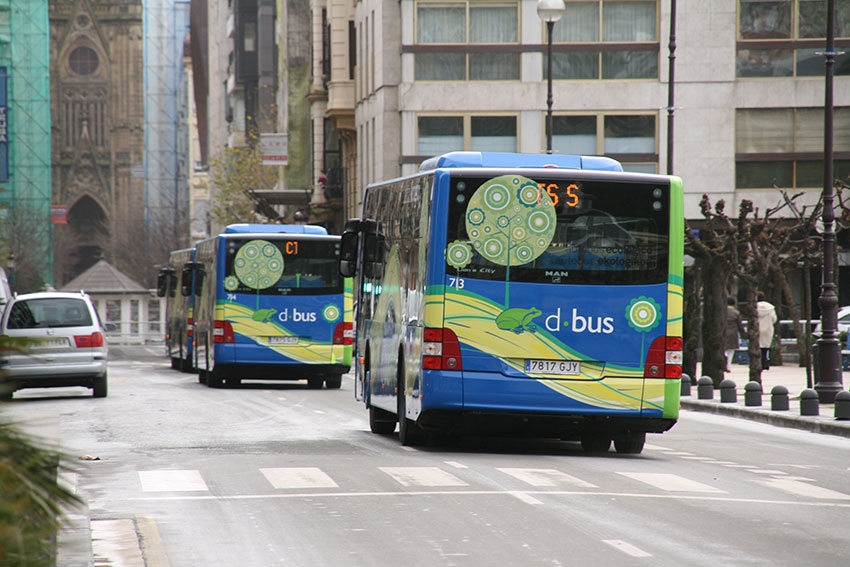 San Sebastian has several sections of bus lane throughout the city. San Sebastian currently has 12 km of bus lane, an exclusive zone for buses and taxis, making sure the buses run fluidly even when there is heavy traffic.

Nowadays, 21% of the kilometres covered by people using Dbus are on bus lanes, thus reducing the time of the journey and improving quality.

Currently, Dbus buses can request priority at 82 intersections throughout the city as well as avail of an exclusive traffic light between San Martín and Fuenterrabía streets.

Coordination with the local police
The Dbus control centre is in charge of coordinating the proper functioning of all the routes and is likewise in constant communication with San Sebastian’s municipal police and traffic wardens.

In the event of any incident, Dbus inspectors can use a computer application to contact the municipal police and request the authorities to intervene.

Improving bus boarding time
Reducing bus boarding time and preventing the formation of queues is key to avoiding delays in the service. To this end, Dbus has installed fast reading validating machines in all of its buses. Validating machines have also been installed near the central door for people with reduced mobility and people with children’s pushchairs, thus making it unnecessary for them to go to the driver to pay their fare.

Decrease/elimination of cash payment on board
Currently, less than 10.7% of the trips made on Dbus are paid in cash. The introduction of contact free intelligent tickets and the new payment systems such as payment using NFC-enabled mobile phones speed up and make fare payment easier for users.

Security camera systems on board the bus
Since 2010, 100% of the Dbus fleet has surveillance cameras on board. Surveillance guarantees the safety of those using the bus and the drivers themselves in the event of any unusual circumstance.

Anti-bunching system on buses
The anti-bunching system is part of the EKO-bus system for improving the efficiency and punctuality of the service. It is supported by a tablet located near the driver’s position. It warns the driver when the distance between buses on the same route is not the proper one to maintain punctuality, and emits signals and recommendations to prevent this from happening.