The ordinary Mugi card is personalized (with a photo), and is therefore personal and non-transferable. In other words, it cannot be used by other people to travel on Dbus. 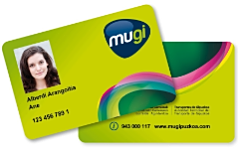 When using the ordinary Mugi card to pay on DBUS, the ordinary ticket fare is deducted, with the fare depending on which journey bracket the user has reached within that particular month.

The existing subsidized Mugi cards are as follows:

When using these cards to pay on DBUS the ordinary ticket fare is deducted, with the fare depending on which journey bracket the user has reached within that particular month. The corresponding subsidies are applied whenever the card is topped up, and never on the bus.

In the case of members of large families, the Mugi card subsidy will be increased by the subsidy corresponding to the category to which they belong (general or special).

You can use the transferable Mugi card to pay for several people on Dbus, as long as there is enough balance. Transfers between Dbus routes are also allowed.

The transferable card is valid for twelve months after it is topped up. In order to activate the card again and avail of the remaining balance, you will need to top it up by at least 5€.

OBTAINING AND CHARGING YOUR MUGI CARD

All Mugi cards can be obtained at authorised establishments (newsagents, book shops and tobacconists) displaying the Mugi symbol. You can also apply for a card by post or online at the Mugi website.

ADVANTAGES OF THE MUGI CARD FOR DBUS USERS

Mugi cards (standard and reduced-price) are for non-transferrable, personal use only. The reduced price scheme applied to certain types of Mugi cards also applies to the Dbus fare. Since credit is calculated when the card is recharged, the standard fare will be deducted when boarding the bus . Fare reductions will be applied to both standard and reduced-price Mugi cardholders according to the number of trips made each month.

Transfers are free between Dbus routes included in the transfer table, provided that no more than 45 minutes lapse between the validation time of the first and second buses. The transfer table is available on bus stop shelters and online at the Dbus website, www.dbus.eus

Transfers between different operators (for example, Dbus and Lurraldebus ) are free.

Transfers are considered a single trip. Therefore the trip counter will count only 1 trip.